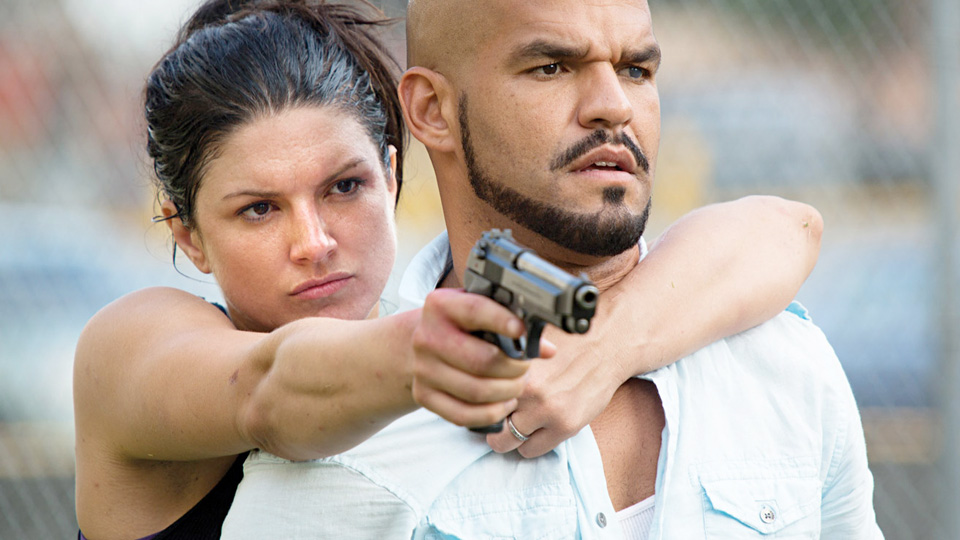 In The Blood movie review

First of all thanks to guys from Anchor Bay Entertainment who gave me an opportunity to watch this movie before the official release on April 4.

Gina Carano gets a second crack at a leading role filled with ass-kickery. In the Blood tells a story about a husband which goes missing during Caribbean vacation, and a woman sets off on her own to take down the men she thinks are responsible.

What can be better to see a former Strikeforce and Elite fighter kicking bad guys?

Of cause, Gina Carano still needs to take a lot of acting classes but when it comes to a fight she turns from a smiling sweet girl to a killing machine and guys in a disco club felt it and regret it for sure, even Danny Trejo got his bull kick.

Playing a silent cyborg in Fox’s Almost Human TV show worked better for her at this stage of her acting skills.

Gina, biting lips and smiling is not acting…

Amaury Nolasco played a very charismatic bad guy who is definitely messed with a wrong girl. Danny Trejo is a mystery man in this flick, probably was invited to bring some brutality to the film.

What is interesting Cam Gigandet, who is a black belt in Krav Maga, played a young husband which can’t fight but in Never Back Down movie he proved himself as a King of underground fights. For me, it is strange to see him in this kind of role but I have to admit he is a very good actor.

You will never get an idea of kidnapping so easy, so better watch it carefully because Gina will uncover the truth about the disappearance of her husband over a dozen of dead Caribbean bodies… one by one.

Fight choreographers Damon Caro (Bourne Ultimatum, Never Back Down, 300) and Jonathan Eusebio (Wolverine, Haywire, Street Fighter) found the best way how to use Gina’s skills so all fights look simple, effective and entertaining. And I’d argue that Carano’s as good a fighter as a couple of the most famous action stars and even better than the rest.

John Stockwell made a good movie full of action, drama, and fights. In the Blood demonstrated a quite good level of quality and it’s nice to see Gina back in action.

I sure we will see more of her movies in the future as she marked herself as a new Lady Dragon in action genre.

Actually, I really want to see her fight against Ronda Rousey, what do you think?

In The Blood is set for release in theaters, on demand and iTunes as of April 4.