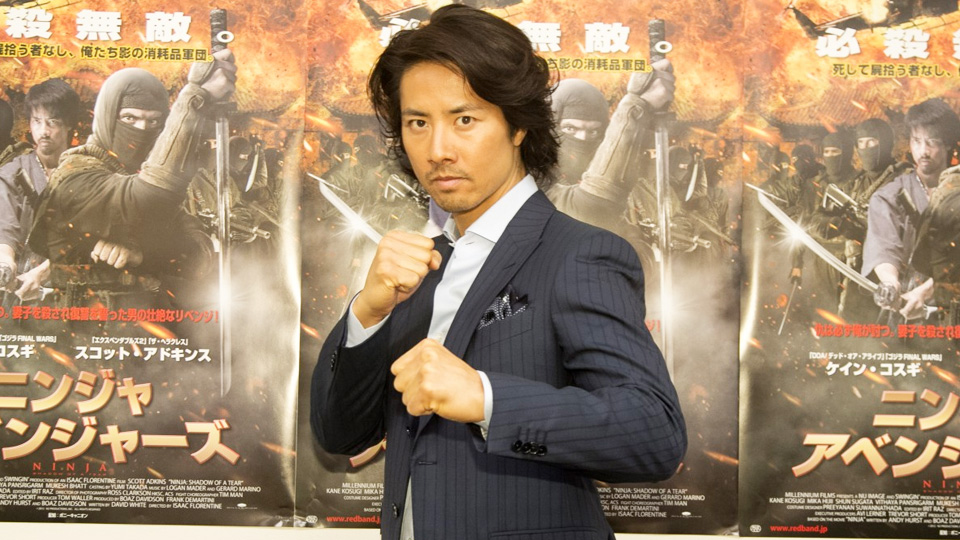 Today I have a wonderful opportunity to talk to Kane Kosugi, a son of the famous movie ninja in the world. Kane is currently in Thailand working on a movie where he is playing a lead character, but he found a time to answer my questions and tell a story of how he couldn’t speak any Japanese, first time met Jackie Chan and started working on Ninja 2 alongside Scott Adkins.

Kane: It’s awesome, growing up, people would always tell me how cool it is and how lucky I am. Also I got to play with a lot of cool ninja weapons growing up.

Budomate: Did you want to follow your father career path?

Kane: After seeing my fathers movie when I was 6 years old, I knew I wanted to do the same thing.

Budomate: Please tell about your training schedule, do you do a lot of training?

Kane: Yes, especially before movies I train everyday. Normally weight/core training 3-5 times a week, stretch an hour everyday, martial arts training 3 times a week. Most of my training is to try to build a flexible, sturdy body so I don’t get injured. Doing action is tough on the body.

Budomate: If you were forced to choose martial arts style you can learn since childhood what it would be (based on your current experience)?

Kane: I would choose Tae kwon do. I’ve been doing it since I was 13 and I love it . I love kicking. Wu Shu I started when I was mid 20’s and I love that too!

Budomate: Do you have a favourite move, punch, kick or trick?

Budomate: Have you tried BJJ or Judo and what do you think about ground fighting in movies?

Kane: I did Judo for 2 years. Ground fighting is cool and now a lot of people put a little into the fight scenes. I think it gives it variety, especially for movies.

Budomate: I have heard your father has a passion for swords as a true Japanese person, do you have it?

Kane: I don’t own any. I do love Japanese spirit and code though. Samurai etc.

Budomate: Why you decided to stay in Japan working on TV and not pursue your career in Hollywood?

Kane: Well, after high school I didn’t really know what I wanted to do, go to college or just study acting. So my father suggested I go to Japan for a while to study Japanese and the culture since I’m a half Japanese. I started working there and just loved it, I knew I could learn so much and what I thought would only be 6 months became more than 20 years.

Budomate: Please tell about your work as a voice actor for video games?

Kane: I don’t get that many opportunities to do it but I like it a lot, it’s fun, especially getting to do my favourite character in Street Fighter, Ryu. But of course I would much rather do the real thing.

Budomate: Please tell about Ninja Senkai Kakurengen TV series, how was it to be a “gaijin tarento” and speak almost exclusively in English during the first few episodes?

Kane: It was when I first got to Japan so I couldn’t speak any Japanese. It was tough because we have to shoot an episode a week. A lot of the times I didn’t even know what the story was about because I didn’t have time to have someone read it to me. But doing that for a year really helped my Japanese.

Budomate: You competed in Sasuke show, a Japanese analog to American Ninja Warrior, was it hard and what did you achieve?

Kane: It was hard , way harder than it looks on t.v. But it helped me to work in extreme conditions and also since I wanted to do well, I was studying on the body and different training methods to get stronger. You only get one shot so the pressure is crazy, it taught me how to relax and work under the pressure.

Budomate: Please tell us how did you meet Jackie Chan?

Kane: I met Jackie through my good friend Jimmy Hung (Sammo’s son) I met Jimmy in Tokyo.Jimmy was going to have dinner with Jackie, when he came for a quick visit, he asked me if I wanted to come and of course I said yes, that was the first time I met Jackie.

Budomate: Will you put your life on the line as a stuntman?

Kane: I used to think that way, but maybe not so much now. I still try to do all my stunts, but I wouldn’t do anything that I thought I couldn’t do. I think it’s important to think about the project as well. If I’m playing a lead role, I can’t get hurt or the project stops.

Budomate: You met Isaac Florentine about ten years ago, on what occasion did it happen and why you did not work together before Ninja 2?

Kane: It was after I did the movie Blood Heat and I got to meet the people at Millennium (Nu Image), they introduced me to Isaac. I really liked him the minute I met him, great guy! Knows so much about martial arts. I don’t know why it took so long but I’m glad it finally happened !! love working with Isaac!

Budomate: You called Isaac a martial arts encyclopedia, what makes you think that, anything he does not know?

Kane: I don’t there’s anything he doesn’t know, he’s a true martial artist, he loves it and respects it.

Budomate: After work with Scott Adkins can you tell what is his strongest part?

Kane: He has many, he’s a really good looking lead actor, great martial artist (one of the best out there), great actor and just a really really nice guy. He’s one of the most unselfish actors I ever worked with. He would offer so many times to cut some of his action moves to give me time to do mine or so that I would have some time to do something that would help my character. Not too many people would do that!

Budomate: So producers did not want to use wires in Ninja 2 and make it like Expendables in old-school style. Is it easier to work without wires and do fights, because wires always were a part of Asian cinema and especially martial arts movies?

Kane: For me I think it’s easier. Wires take time to set up and get the timing right. I think if you can do it without wires, it’s better that way. And when you do use it , use it well so people don’t know you used it.

Budomate: What is you favourite character in Expendables and why?

Kane: All of them , seeing the greatest action stars in the same movie is just awesome. Especially the scene with Stallone, Arnold and Bruce Willis. I watched them growing up !! But the best was when Jackie and Jet Li fought in the Monkey King, I had goose bumps !!!

Budomate: Do you watch a lot of Ninja movies now?

Kane: I watch all kinds of movies but especially action movies. Now there starting to come back, for a while they disappeared.

Budomate: Did you like your father’s character in Ninja Assassin, does it up to quality of a true ninja movie?

Kane: Yes I did, and I thought it was new and different. Very cool fight scenes.

Budomate: Please tell about D.O.A. movie, how was it to be surrounded by pretty girls?

Kane: DOA was my first U.S. movie since I was a little kid working in the states so I was really excited. It was a fun shoot and I learned a lot. Of course having so many pretty girls always helps.

Budomate: You worked with Corey Yuen on the War movie alongside Jet Li, was it hard to fight such a Wushu master under Mr. Yuen’s supervision? How long it take to prepare a fight and were there any difficulties?

Kane: Corey asked me if i wanted to fight Jet Li after DOA, they had already casted everyone so he and the producer added a small role for me. It was one of the top experiences I ever had next to Jackie of course. Working and watching the greats are always special !! We didn’t have much rehearsal time but it was easy to fight with Jet. Let me just say that he so good, he doesn’t make any mistakes : )

Budomate: How did you land on a role in Muscle Heat? Did you do all your stunts?

Kane: Muscle Heat was basically made with me in mind, the producer wanted to do a project with me and had the script written. I did do all my own stunts. The jump off the bride was one take : ) don’t think they wanted me to do that too many times.

Budomate: In Choy Lee Fut you played alongside Sammo Hung, a big brother of Asian cinema, how was it?

Kane: That was cool ! I didn’t really get to talk to him but I was pretty nervous. The Lead, Sammy was great to work with ! Sammo Hung sons are all my friends, their so down to earth!

Budomate: What was your hardest role so far?

Kane: That’s a tough question, For action I would say working on Coweb was tough, the fight scenes were brutal. I was bare foot so my feet were all swollen (like pigs feet) and the skin under my feet were all torn up from the concrete. It felt like I was hit by a truck every morning.

Budomate: If you will have an opportunity to film your own action movie who you will ask to play a bad guy?

Kane: Don’t have anyone in particular but people that I would love to work with in a fight scene is Jackie Chan, Donnie Yen and Scott Adkins again.

Budomate: What does it mean for you “doing action movies”?

Kane: It’s my dream, a blessing, a gift, something I love to do and when it’s over I miss very much.

Budomate: Who is on top of martial arts movie world now?

Kane: I guess it would Donnie Yen right now.

Budomate: Who is the most promising Asian action star on your opinion?

Kane: Asia, don’t really know, but in my opinion I think Scott Adkins should be near the top soon!

Budomate: What do you think about raising of Thai movies and stars such as Tony Jaa or Jeeja Janin?

Kane: I think it’s great! Both are awesome. I’m actually working in Thailand right now. I love the movies here.

Budomate: Have you seen Karate Girl movie with Rina Takeda, what did you think?

Budomate: Will you except an offer from Gareth Evans to work on The Raid 3 film alongside Iko Uwais and Yayan Ruhian?

Budomate: Have you heard about Street Fighter: Assassin’s Fist project, did guys tried to contact you and invite to their project while thee were searching for actors in Japan?

Kane: No I haven’t heard about it , first time, would’ve loved to play a role in that.

Kane: Police Story, Once upon A Time in China and Enter The Dragon.

Budomate: What is cooking now, your next move?

Budomate: Thank you very much for your time Kane, it was a pleasure to talk to one of talented action stars, I sure we will hear much more from you since you are back on a radar after Ninja 2.

Kane: Thank you for having me !! And thank you for supporting Martial Arts!! I hope we can do this again.

All rights for Kane Kosugi interview reserved by budomate.com and can not be used without official permission.